I was tagged by Leslie at Do You Weary Like I Do for this meme, and after a bit of searching I discovered where it originated. Bookbabie wrote:

As I read yet another book review of a memoir this weekend, my husband told me that I should write one. I said that my story would be much too short and rather boring so when I ran across the following book I decided it was just my speed. A six word memoir! Written by Larry Smith and Rachel Fershleiser, Not Quite What I was Planning: Six Word Memoirs by Writers Famous and Obscure is a compilation based on the story that Hemingway once bet ten dollars that he could sum up his life in six words. His words were- For Sale: baby shoes, never worn. There’s a video on Amazon with examples from the book, it sounds like a fun read! I’d like to start a six word memoir meme and here are the rules:

1. Write your own Six-Word Memoir.
2. Post it on your blog and include a visual illustration if you want.
3. Link to the person that tagged you in your post and to the original post if possible so we can track it as it travels across the blogosphere.
4. Tag at least five more blogs with links.
5. Leave a comment on the tagged blogs with an invitation to play.

I thought this would be hard. I thought that all I would be able to come up with was some lame, ridiculous attempt at either a) humor or b) wit. As it turns out, my six words were right in front of my face. My spiritual growth in the last 2 years has been exponential because of one thing: the realization of what it means that God is sovereign and in control of everything. So my six word memoir would have to be:

I'm called according to His purpose. 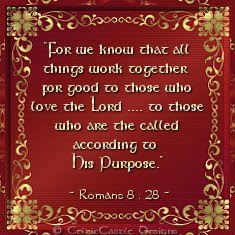 I need to tag 5 people now, so Alana, Rhonda, Karen, Buffi and Linda, you're it! Please don't feel pressured to participate and if you are reading this post and weren't tagged but want to participate, I would love to see your responses!

Posted by Xandra@Heart-of-Service at 7:10 PM

LOVE, love yours too!

I love yours too! See, I've seen this going around and I half wanted to be tagged for it because it's so cool, but I half didn't because I know I'll never think of anything half as cool as yours. But I'm going to sleep on it and see what I can come up with. Thanks for tagging me:)

Thanks so much for playing, your memoir is inspiring and lovely. It's been fun reading everyone's six words and their blogs:)

That is a great meme. I will try to do it, but I'm going to have to put my thinking cap on!